First it was Sandalwood Blood. Now it’s They Said. Two books in a space of seven years, authored by a Fijian in Tonga, Iliesa Samu Lala.

Now 72 years old, the almost-7-foot giant of a man’s recent work, They Said, collects discussions and conversations he recorded over the years as he travelled the globe.

These adventures include a revelation about the ill-fated RMS Titanic’s voyage at an international poetry meeting in Philadelphia to sitting next to a world-famous astronaut high above the clouds; witnessing the best in human nature while escorting a sick stranger to London from the Pacific Islands to innocently picking up two hitch hikers on the road from Macedonia to Greece; and being asked the question, “Do they still eat people in Fiji?” at Wembley Stadium in London. They Said describes these unique encounters as they are experienced and felt in each location, situation, space and time.

Iliesa Samu Lala or Sam Lala, as he is known in Tonga, had been residing and working in the island Kingdom since 1985. After a year as a teacher in Fiji, Lala has held various roles in the airline sector spanning a good 40 years in Fiji, Australia and Tonga. A keen singer, throughout that period he has been deeply involved in youth ministries, writing numerous plays, skits, cantatas and musical dramas.  He talked to our correspondent, Iliesa Tora at the launch of They Said.

Islands Business: Who is Iliesa Samu Lala? Can you explain where you are originally from and your ties in Fiji?

Iliesa Samu Lala: I was born on April 22, 1949. I am from Lami Village, but the original village was Waiqanake, in the Tikina of Suva and the Yasana o Rewa. I am from the Mataqali Natodre within the Yavusa of Navakavu. My mother is from Kavula village in the district of Lekutu in the province of Bua. My name is taken from my mother’s village in Bua.

I received my primary education at the Lami Primary School before I moved to Ratu Kadavulevu School for my high school. Then it was to the University of the South Pacific then on to Hawthorn Institute of Education at the Melbourne University before I also attended the Faith Seminary in Tacoma, Washington, facilitated here in Tonga Facilitation, studying for my master’s in theological studies.

IB: How did your interest in writing start and how have you managed to nurture that interest?

ISL: [It started] at the encouragement of the then-Director for Tonga Tourism, who requested I find a Tongan history that can be enacted as part of the Tonga Tourism attraction. That got me putting together some thoughts towards writing stories.

A paragraph from the writing of Monsignor Blanc, a Roman Catholic priest (1838), attracted my attention. The paragraph was so capturing that sent me searching for supporting articles and I visited the ‘Atenisi University of Tonga, the Royal Palace Library and the Australian National Library in Canberra.

I also visited the New South Wales Library and the Maritime Museum in Sydney, Australia. I also wrote to people in South Africa and Manila, Philippines and interviewed locals in Tonga and New Zealand, [it] got me really involved.

Thus the writing of Sandalwood Blood. There was also interest expressed from Beverly Hills for a possible movie script. Also on the suggestion of the then Australian High Commissioner to Tonga, a description of the book was sent to the Australian Film Commission.

The positive review shared in the Pacific Island Business and Tales from Pasifika, and the current state of Sandalwood Blood, which is still listed on Amazon books, along with the greatest of support from Her Royal Highness, Serene Princess of Tonga, Princess Salote Mafile’o Pilolevu Tuita, these gives me strength and determination to continue.

IB: They Said is totally different writing and angle. How did that idea start?

ISL: I had commenced writing a possible sequel to Sandalwood Blood but was halted when asked by the Second Secretary to the former the High Commissioner for India to Fiji to write something regarding the relationships between the Indo Fijians and the Indigenous [people] of Fiji.

Whilst searching for a title to that subject, I stumbled on a paragraph relating to the experience of Mariner, the young British survivor from the boat Port Au Prince, captured and wreaked in Ha’apai here in Tonga in 1806.

The statement was: “I saw Indians come on board.”. The statement got me doing some research in how Indians came to Tonga and their various influences, [and] a statement uttered from the lips of a very sick Indian gentleman who said, “I have so much in my brain that I don’t know how to get rid of” stirred my mind to ask, “why do people say such things?”

I drew back from memories of my own experiences where I hear such statements that require some thinking, and I chose to entitle my book They Said. After all, most of what we inherit today, even believe, are based on what someone said.  Topics in my books such as ‘The Human Brain is too small’, ‘Christianity is not for the Fijians’, ‘Do they still eat people in Fiji?’  and others can be very arresting in ways.

ISL: Currently, two very important inspirations are on my desk. I am praying for directions to proceed further.

ISL: I am always moved by a couple of scriptures:

Paul’s response to King Agrippa as recorded in Acts 26:19 (NKJV)”Therefore, King Agrippa, I was not disobedient to the heavenly vision.”

Ecclesiastes 9:11 (NKJV)-” I returned and saw under the sun that the race is not to the swift, Nor the battle the strong, Nor bread to the wise, Nor riches to men of understanding, Nor favor to men of skill; But time and chance happen to them all.”

Iliesa Samu Lala’s books are available at The Friendly Island Bookshop in Nuku’alofa, and the University of the South Pacific book centre.

This article was first published in Islands Business in May, 2021. 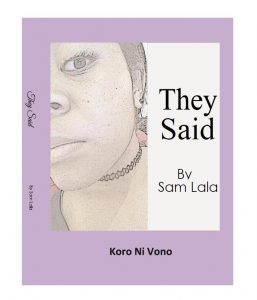 Hashing for fun, well-being and harmony Grab a cuppa with Mana Coffee