The trip to Moce in Fiji’s Lau group, I must admit, was scary but thrilling for me. It was the first time I’ve travelled by boat by myself, and I didn’t know anyone else aboard.

At the back of my mind as I boarded the Lomaiviti Princess IV, was how I was going to manoeuvre around the village because, first of all, I’m a woman, and second, I’m not from Moce island.

I need not have worried. As soon as I sat down, two wonderful gentlemen befriended me. I instantly felt at ease as Alifereti Bogiva and Taniela Gaunavou started advising me on what to do and what to expect on Moce.

They had lots of practical advice for the voyage too. I had brought food with me, as I intended to eat during the ride, but Alifereti insisted I eat before the boat moved. “Sera, you need to eat now before the boat leaves because you won’t be able to get a chance to eat dinner tonight because it will be rough seas, and also you need to have something in your stomach to avoid getting seasick,” he said, with Taniela agreed wholeheartedly.

Trusting the men completely, I ate my dinner. However, while I was eating, there was a huge commotion. Apparently one of a duo filming a TikTok video atop the boat stepped off a plastic portion of the roof. His feet broke through, the police were involved, passengers were questioned and the TikTokers were taken to the police station. It meant we didn’t leave until 11pm, leaving the TikTokers behind.

As we departed from Suva wharf, the city lights started to fade away, and I felt the cold splash of wind and weather start to change. The two gentlemen who were worried about me insisted that I go inside the boat, and found a spot for me to lie down, Taniela saying, “You better go in before we cross the Koro Sea because the sea will be really rough tonight and the waves will wash over the boat. You will be cold and wet.”

I boarded the boat as suggested, and 15 minutes later, the boat began rocking so violently that the chair I was sitting in skidded from one corner of the room to the other, catching me off guard and forcing me to lie down on the floor with my legs securely tucked between the railings.

I will say this: travelling in bad weather at night can literally knock your socks off. Crashing into the wave felt like crashing into an oncoming vehicle; it was definitely an experience.

However, as they say, joy comes in the morning, and the view on waking the next day was simply breathtaking. The ocean was different shades of green and blue, it was mesmerising. As we drew closer to Vanuavatu, I saw fibre boats coming towards the ship. I asked one of the fellow passengers and he said, “There is no port there, so they are coming to board the boat, and some come to sell items.”

Speaking of selling, I feel the need to warn first-time travellers on the Gounder vessel that the price of food and drinks on the boat is expensive, so bring some money along with you if you are travelling to Moce, because it takes almost two days to reach there after sleeping over in Lakeba.

Alifereti and Taniela’s fun and jokes to make me feel comfortable during the trip made my heart swell with emotion. These complete strangers treated me with what we are most famous for in Fiji; Veikawaitaki (care), loloma (love), and veiwekani (relationship).By the time we reached Moce, I had formed a good relationship with my yanus and, surprisingly enough, some of my tauvus, who made the trip extra enjoyable.

As I was making my way to the offloading area, one of the men said to me, “Yanu sa vavarau tiko mo lade?” (translation: “Yanu, are you ready to jump?”) Of course, this perplexed me, and he pointed to the side with a huge grin on his face. I then realised I had to jump a short distance to a fibre boat. I looked at my size, my baggage, the waves and the boat, and thought to myself, “God please don’t let me sink this small boat when I jump in.”

For those that haven’t tried it, let me say it’s harder than it looks. You have to calculate the moment the waves go back after crashing on the side of the boat before you stick your landing, and that can be the matter of a split second. I’m happy to say I managed to land on both feet and the boat survived the jump.

After travelling midway between the boat and land, our driver announced we had run out of fuel. I have to admit that I found the whole trip rather adventurous and the situation somewhat hilarious. After waving to another boat to bring fuel, we managed to reach the shore, and I was able to sit and observe the majestic view before me.

A few tips you need to know when going to the villages in Moce:

One of the things I liked best about exploring Moce was their sustainable way of life: the villagers use solar energy, they drink rainwater stored in tanks, fishing is prohibited in some areas, and they eat what they grow.

I stayed with was the principal and vice principal of Moce Secondary School. This beautiful couple made me feel so at home; and before long I felt like I had known them for so long.

Every night during my stay, their beautiful vatuniloa made from coconut leaves roofing was always filled, according to Vunise, fondly known as Vuni. She says, “It’s because you are here, the boys want to pauta.”

My days were spent doing some work, and my meals were all the ‘kusima’ my heart desired. I could have fish for breakfast, lunch, and dinner. On a Saturday, though, I woke up to lobsters freshly caught the night before, so it was lobster for breakfast, lunch, and dinner. I did not think of chicken at all. My husband called me later and asked me whether I was craving Wishbone or McDonald’s. My answer was an immediate ‘no’! I realised after that conversation that there is a certain sense of empowerment that fills me with not needing those fast food options, and understanding that it is easy to go without them.

The women of Moce are famously known for their tapa making. It is one of the major sources of income in the village, raking in more than $1000 a month. When there is a chief guest, all the women come together in the community hall to work on a big piece of masi together. There is a secondary and primary school, a community hall, a church and two villages on the island, Korotolu and Nasau.

But you have not completely stepped into Moce unless you visit Koroni. A 15-minute boat ride away, Koroni is a hidden paradise. With white sandy beaches, a beautiful landscape, and gorgeous turquoise and clear blue waters, how can we not fall in love with this place? We spotted about four baby sharks just swimming leisurely in the waters, our driver, Tua Mua saying, “It’s OK, you don’t bother them, and they won’t bother you.” This advice was at the back of our minds as we decided to jump off the famous rocky perch of Koroni into the clear blue waters. As I put on my swimming goggles, I watched the fish swim towards me curiously.

My days on Moce were filled with a lot of walking, interviewing, and bantering with the villagers. At night, we sat around the tanoa and talked about anything, from global challenges to those of the villages. Our endless banter around the tanoa, saw us dubbed the “bolabola crew.” I look around and I feel a bond that will forever cement my love for Moce and its people. Away from the total distraction of technology, I sit here enjoying a bowl or two and humbly thanking them for an adventure of a lifetime. As I said my farewell the next morning, ‘Moce Yani Moce’, and heard the ‘Isa isa’ and ‘Yanu, don’t forget us’, I knew that I left a piece of my heart on this beautiful island and I silently cried as I waved goodbye.

11 Comments on “A trip to remember: Moce island” 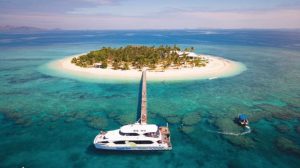