Fiji has some of the globe’s most enviable and internationally renowned dive sites, and to dive in the Somosomo Strait, home to the White Wall and the Rainbow Reef, is bucket-list level for divers around the world.

The Rainbow Reef is essentially a channel between Taveuni Island and Fiji’s second largest island, Vanua Levu. Taveuni may be affectionately referred to by locals as the Garden Island of Fiji, for its lush greenery and fertile soil, but it is also increasingly becoming a global dive capital. One of the most famous sites in the Pacific region, Rainbow Reef makes for a spectacular dive, regardless of which of its many gazetted sites you are taken to. Depending on visibility, it sometimes feels like an artist has thrown her palette against the reef, touching both fish and rocks.

Somosomo Strait is largely untouched, except for crazy divers wanting to get a piece of it. Nature ensures that it is well-nourished, and a consistent food supply brings out marine creatures—a kaleidoscope of varying sizes—to feed on its reefs, and unwittingly provide sumptuous viewing for visiting land-dwelling mortals.

During a recent dive, a manta ray glided right past us, as if domesticated, uninterested in what the humans were up to. There were turtles, lion fish, baby lobsters, fusilier fish, mackerel, white tip sharks, nemo, snakes, giant clams, flatworms, jelly nudibranch, all different kinds of butterfly fish, big-eyed night fish, puffer fish – the list goes on: Fiji reportedly has some 1200 species of fish.

The Great White Wall is breath-taking, in all senses of the word – it is like cruising by a bejeweled wall: fascinating to a point that you almost forget your dive buddies. There couldn’t have been a better name for it – a sheer fall of more than 90 metres, encrusted with soft white corals, giving off an eerie feel of a population of glow worms.

However, before you venture deeper and a little further from the White Wall to be able to fully appreciate it, you experience another reef eco-system of hard corals teeming with an array of different forms of life, from the minute jelly nudibranch to a pair of sharks just hanging out for some nibbles.

Another reason why the Rainbow Reef must be on your list if you’ve made it this far is simply, the terrain. Remain still, and you can watch these incredibly colourful creatures moving through what I imagine is a typical reef day.

Swim throughs are the best, albeit a little difficult if it is a particularly coral-clustered passage, as we must stay true to our vow as scuba divers that we will not break coral or disturb in any way your dive site. They are sacred spaces.

I have experienced other Fiji dive sites, but nothing beats Rainbow Reef and the White Wall. One of my best memories is of the World War II wrecks in Palau. But it is to the Rainbow Reef I return every Easter, perhaps motivated as well by the fact that for a few days, I will be eating organic food at Paradise Taveuni. It is nestled in the southern tip of Taveuni with a charming band of resort staff and dive crew whose warmth and kindness brings me back here whenever I can make it.

Pacific indigenous communities are inextricably linked to nature as peoples; many communities have land and water totems. Sharks and octopus represent revered ancestral gods for certain regions of Fiji.

The age-old link between island communities and their seas, traditional fisheries management and the occasional taboos to mark a death of a high chief, have without a doubt contributed to the nurturing of dive sites like the Rainbow Reef and the White Wall to what they are today.

In the words of the late Epeli Hau’ofa, academic and writer: “We are the sea. We are the ocean.” The lives of the people of the Pacific or Oceania continue to revolve around the water that surround their island homes.

The people and the waters that surround us are one. It is perhaps this innate spiritual link that emboldens one to invite you into our homes, both on land and in our seas. It is in this entrenched spiritual link that we encourage return guests to our Fijian slice of the Pacific Ocean. 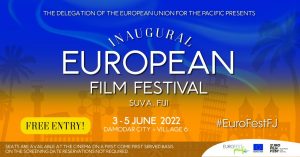 European Film Festival on this weekend